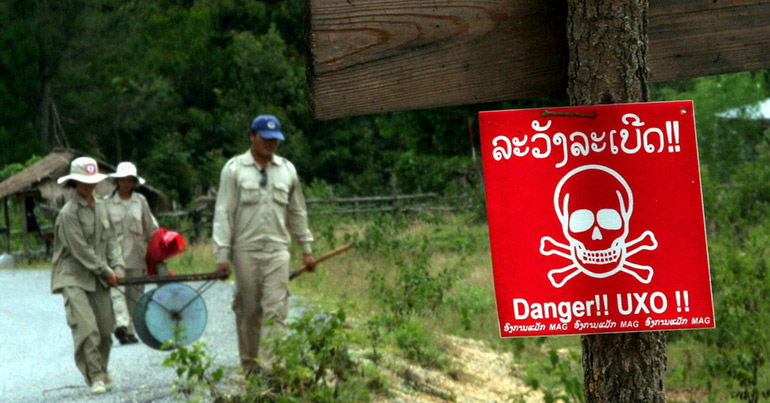 It’s a normal day which 8-years old Simok spends together with his friends, playing in the endless forests of the north eastern province Xieng Khousang, Laos, when his life changes forever.

Together with his playmates he runs around trees and hides in bushes, when he suddenly finds a strange looking object, a small round metal ball, which looks like an interesting toy.

“Noi! Khaek! Look what I found!”, Simok screams excited, holding up his new favorite toy. As Noi and Khaek arrive to the scenery, their faces solidify in fear and dread. They know, as children from the village, in contrast to Simok who is from Vientiane (the capital of DRP Laos), that the little ball in Simok’s hand is not a toy. What Simok is holding in his hand is Laos legacy of the Vietnam War, UXO (unexploded ordnance).

“Stay where you are and don’t move Simok!”, scream Noi and Khaek frightened, considering what to do next. Their faces are drawn by fear and Simok starts panicking. He does not know what is going on. Why are his friends suddenly so serious and scared to come closer towards him?

Afraid and confused, Simok makes the momentous decision to throw the ball back to the jungle and starts running towards his friends. A loud explosion, followed by darkness is all the 8-years old boy remembers…

Simok wakes up the next day in the local hospital and is in great pain. While his two friends only have bursted eardrums, Simok has lost both hands and his face is disfigured due to nasty scars which will stay for a lifetime. Traumatized and marked, his life will never be the same again.

The story of Simok is just one of twenty thousand other stories of people who got killed or injured by unexploded ordnance in Laos since the Vietnam War has ended in 1975. Forty percent of the victims, about 8000 people, are children.

What is UXO (unexploded ordnance) and where does it come from?

From 1964 to 1973 the US Army dropped more than 2 million tons of bombs over Laos in about 580,000 bombing missions, which is equivalent to one bombing mission every eight minutes (!), 24 hours a day, for nine years. Consequently, Laos is the most-heavily bombed country in the world.

The US Army had two aims in bombing Laos. One was to destroy the “Ho-Chi-Minh path”, a secret path through the jungles of Laos, Cambodia and Vietnam, named after Ho-Chi-Minh, leader of the Viet Minh (a communistic fighter group, also known as the “Viet Kong”). The path was consisting of many small paths, cowered by jungle and was used as a route to support the Viet Minh soldiers who were fighting against the US Army and its allies in southern Vietnam from 1955 until 1975 during the Second Indochina War, also known as the “Vietnam War”.

The other aim was to damage and destroy the “Pathet-Lao” (Eng.: “Land of the Lao”) movement, which was the Lao independent movement, supported by the Vietnamese Communists.

Officially, the USA never were at war with Laos.

Of the 2 million tons of bombs, more than 600,000 tons of bombs, about one third of the bombs which were dropped over Laos, did not explode and remain in the ground until today. Being a great risk for inhabitants, approximately 25 per cent of the country's villages, and every of Laos’ 17 provinces, are contaminated with unexploded ordnance (UXO) nowadays.

The picture on the right side shows a B52D bomber, used by the US army during the Vietnam War, as well as in the Secret War in Laos. Those bombers could carry up to 22.000 Ib (9,980 kg) of bombs.

Apart from big bombs, the US Army also dropped about 270 million “bombies”, of which 80 million failed to detonate.“Bombies”, are cluster bombs, bombs as big as a pool-ball, which fall out of a bigger container, used to damage a wide area. Those bombs are easier to detonate than other bombs, because of their small size and therefore form the biggest threat of UXO in Laos nowadays. In many cases, farm land is contaminated and the farmers have to take the risk of getting killed or injured by UXO while cultivating their land to make a living.

Pictures above: Cluster Bombs ("Bombies") inside a bomb shell and a "Bombie" in the hand of a human

The long process of achieving peace for the people of Laos

According to the UXO museum in Luang Prabang, Laos, which I visited in April 2018, the clearing of contaminated land will take, because of too little funding, at least 100 years from now. The government of the PDR Lao, the NGO “UXO Laos”, the “MAG (Mines Advisory Group)” and the government of the United States of America support the clearing of contaminated land financially, as well as physically.

In 2016 president Obama announced, the US will provide an additional $90 million over the next three years to help Laos clear its land contaminated by UXO, which is $10 million dollar less than what the US has spent in the last 20 years on clearing its UXO in Laos. From 1963 until 1972, the US has spent 13.3 million dollars (in 2013 dollars) per day, to bomb Laos in such a frequency as mentioned above. In just 9 days of bombing, the USA have spent more money, than they had spent in 20 years (!) on cleaning contaminated land.

Until all land is cleaned in 2118, the people of Laos remain in a state of fear and anxiety, trying to make a living in their given circumstances…